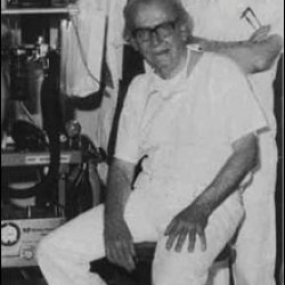 Griff joined the Medical Service of the Indian Arny straight after graduation and was posted as the sole anaesthetist to a small general hospital in Rawalpindi where he learned his trade by reading and experience, a process described in his Gillies Memorial Lecture to the Scottish Society (referenced below). Battle casualties became an increasing part of the workload and later, transferred to the east, he witnessed Kohima, the ‘battle which saved India’, marvelling at the discipline which enabled British soldiers to advance in the face of withering gunfire. In 1945, after demobilisation graded as a Specialist Anaesthetist with the rank of Major, he travelled to Edinburgh, perhaps through a war-time contact, and there spent the rest of his career, working mainly with the Professorial Surgical Unit at the Royal Infirmary, but also with the regional cardio-thoracic unit, retiring in 1980.

The first professor of surgery with whom he worked was Learmonth, who developed (in the pre-drug treatment era) the operation of total sympathectomy for the control of hypertension. A totally bloodless operating field was demanded to allow identification, through an extensive thoraco-laparotomy, of all the elements of the sympathetic outflow. This was achieved by the production of profound hypotension using high spinal anaesthesia for two procedures, one on each side, two weeks apart. In view of the poor cardiovascular status of the patients the results were nothing short of amazing, and the 1948 paper (written jointly with his senior colleague, John Gillies) describing and explaining the work remains valued reading. A few years previously Griffith in Montreal had shown, through his work with curare, that anaesthetists could control respiration, and now Griffiths in Edinburgh had shown that this was also true of circulation. It was a major event in the post-WW2 development of the specialty. Later, struck by the failure of surgical fixation to deal with the ‘flail chest’ syndrome associated with multiple rib fractures, he demonstrated that ‘internal’ splintage using artificial ventilation was a more effective treatment. Again the impact was significant for the development of the specialty because the 1963 paper describing this work was a major contribution to the acceptance that intensive care was a ‘part’ of anaesthesia. A final interest was the ‘rehabilitation’ of chloroform, showing that it was a safe agent when used with modern, metered methods, but its last recorded use in Edinburgh, the city where it was introduced to the World, was on the day he retired. Although he was elected FRCSEd in 1963, the importance of his work really merited more formal recognition, but he was never one for organisations or conferences and, professionally at least, was never happier than when in the operating theatre. However, his achievements, standards of clinical practice (he was also a skilled diagnostician), teaching, and support for colleagues earned him a very special status (legendary really) with all those, no matter what the specialty, who worked with him. A day in theatre with him was an education.

His father, a Captain in the Indian Army, had ‘run away’ to join up as a boy soldier, but nonetheless did not support Griff’s desire to study medicine so he had to pay his own way, sometimes working as a school teacher and occasionally ‘living rough’. This and his wartime experiences perhaps account for his good humoured, kindly and generous outlook on life. In 1940 he married Joan Knox Ord, whom he met when a student in Calcutta; they had two children, both lawyers. He had many interests, but his great past-time was salmon fishing.

Sources and any other comments: [1] Masson AHB. Obituary. BMJ 1991; 302: 344 [2] Griffiths HWC. Clinical anaesthesia, retrospective and prospective. Newsletter of the Scottish Society of Anaesthetists 1983; 24: 19-21 [3] Wildsmith JAW. HWC Griffiths, chloroform and its last (?) use in Edinburgh. Proceedings of the History of Anaesthesia Society 2010; 44: 100-3 I thank his son, John, for providing access to family papers, for reviewing the script and for providing the photograph taken immediately after that ‘last’ chloroform anaesthetic.