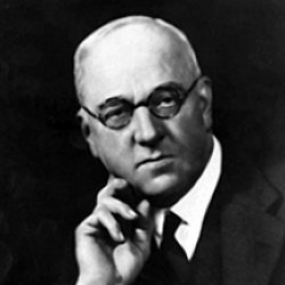 After qualification Rowling was Junior House Surgeon Leeds General Infirmary, then an assistant in general practice before becoming a principal. He became Honorary Anaesthetist to the LGI in 1910 and subsequently at the Ministry of Pensions Hospital, Leeds and the West Riding County Hospital, Otley. Was Honorary Lecturer in Anaesthesia at Leeds University, but date yet to be established. He was in the RAMC for 2-3 years during WW1 at Becketts Park Army Hospital, Leeds when he used Kuhn’s tube for intubation. Worked with (Lord) Moynihan.

His MD thesis was concerned with the accurate measurement of anaesthetic agents having, in 1911, described calibration of his Clover’s inhaler. Subsequently he described the ‘Rowling’ bottle for delivering accurate concentrations of chloroform (BJA 1932; 9: 59-66) and a method for measuring carbon dioxide concentrations in anaesthetic gases (BJA 1950; 22: 25-33); also produced the ‘Rowling’ CO2 absorber. He was a Fellow of AAGBI, Chairman of Leeds University Convocation 1924-26, and later a member of University Court. In 1948 he was the first President of Yorkshire Society of Anaesthetists and was one of the very first group elected FFARCS.

He was an Officer/Brother of the Order of St John of Jerusalem and a corps surgeon to the St John Ambulance Brigade. A lay preacher in the Church of England, he was a non-smoker, a total abstainer and took his holidays as a ship’s surgeon. He subsidised the manufacture of humane killers for cattle. His first car was a de Dion Bouton (registration UA 12) with tiller steering.

His daughter, Dorothy, who later became an orthopaedic surgeon, was resident anaesthetist in Leeds General Infirmary, this resulting in the following being sung at a hospital concert:

Our anaesthetist now is Miss Rowling,
All the taps and tubes she's controlling.
But there's no need to fear
For Daddy is near,
And we all find that very consoling!

Sources and any other comments: Obituaries and interview with son (a retired surgeon) in 2015