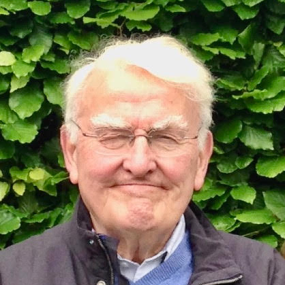 Alun Davies celebrated his Diamond Wedding Anniversary on 7th October 2021. He had met his future wife, Angela, when they were students together at Westminster Medical School. He was a devoted family man and proud of his two sons, their wives and his four granddaughters.

After early retirement due to stress related ill health he studied Local History and obtained an MA from the University of Keele. For a few years he taught Medical History in the new Medical School at Keele.

He researched and published ‘The North Staffordshire Royal Infirmary’ to coincide with the bicentenary of that hospital. His book detailed the efforts to fund hospital care and achieve high standards of medical care in a deprived industrial area, the Potteries.

He appreciated Victorian engineering especially steam engines and supported a number of conservation societies. He enjoyed opera and classical music. He was very widely read and enjoyed sharing his knowledge. He had a reputation as a raconteur.

In 2017 he and Angela moved from Staffordshire to Suffolk to be near family. He died from pulmonary fibrosis in the West Suffolk Hospital.