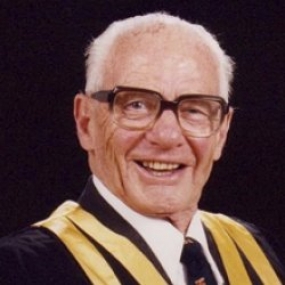 Other nationality: Australian from 1962

Dr Roberts was sequentially resident house surgeon (1933), resident anaesthetist (1933-4), senior resident anaesthetist (1934-6), and assistant anaesthetist (1936-9) at the Middlesex Hospital before being appointed to the Honorary Staff in 1939, and continuing to work there under the auspices of the Emergency Medical Service until 1945. Because of the need for his services in London he was not called up for National Service until 1946, but a riding accident after receipt of his papers caused him to be declared unfit. He spent eighteen months in 1947-8 in a joint University & Hospital post in Utrecht, part of a teaching project to help The Netherlands recover from WW2.

In 1949 he emigrated to South Africa, spending a year as principal anaesthetist at the University of Witwatersrand and Johannesburg General Hospital, and 11 years as senior part-time anaesthetist at the hospital. From 1962 he spent 10 years as the Director of Anaesthetics, Royal Hobart Hospital Tasmania, followed by a three year stint in anaesthesia in Bulawayo, Rhodesia and another three in Johannesburg, before returning to Hobart in 1979, working part-time in private practice for two years and part-time as a medical assessor for the Department of Veterans Affairs until his final retirement in 1987.

Dr Roberts’s ‘wanderlust’ seems to have stemmed from his mother who, after his parents separated when he was six, cycled (with him on the carrier) from Durham to her parents in London, and his life continued to be just as eventful thereafter. The details are documented in the references below, but it is hoped that the material can be made more readily available in the UK, particularly his account of working in London during the WW2 ‘blitz’. He was keen on a wide range of sports, and an active ornithologist.

In addition, Prof Nigel Roberts has kindly provided the College with a PDF copy of the fascinating memoirs of his father, available from archives@rcoa.ac.uk on request.

Thanks are due also to Rose Sayce, David Wilkinson, Peter Gordon (South Africa), Monica Cronin (Melbourne), Marcus Skinner (Hobart) and for their help.