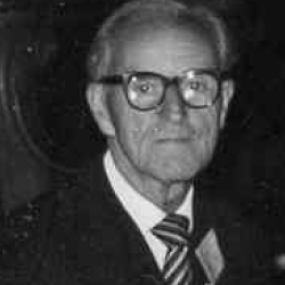 Also known as: Alfred; often referred to as ‘J Alfred’, and occasionally as ‘The King’!

After resident posts at Princess Mary Maternity Hospital and the Royal Victoria Hospital, both in Newcastle, in 1929 Dr Lee bought a share of a general practice in Southend-on-Sea. However, his interest in anaesthesia had started while he was a house surgeon, and in 1931 he was appointed GP anaesthetist to Southend Victoria Hospital, obtaining a similar appointment at the then new General Hospital the following year. During WW2 he became a full-time anaesthetist, working for the Emergency Medical Service at Runwell Emergency Hospital for 5 years, and in 1947 consultant at Southend General, an appointment he held until retirement in 1971. However, he continued to write, to teach and to give anaesthetics for many years after that.

As is shown by the high standard of the many editions of his great text, ‘A Synopsis of Anaesthesia’, Alfred Lee was one of the great polymaths (arguably the greatest) of anaesthesia (and not just in the UK), but his activities in several fields stand out. Early in his career he was at the forefront in moving anaesthetists out of the operating theatre with two British firsts: 1948 – an Anaesthetic Outpatient Department; 1955 – a Postoperative Observation Ward, considering this innovation the source of his greatest professional satisfaction. Later, he was known for his promotion (at a time when the methods were under a safety cloud) of regional nerve block techniques, especially spinal anaesthesia, and also his enthusiasm for the study of the history of the specialty. He published and lectured widely. He made many contributions to, and was honoured by, the organisations of the specialty: RSM Section - President 1959, Henry Hill Hickman Medal, 1976; AAGBI – elected member of Council 1959-62, chair of Editorial Board of ‘Anaesthesia’ 1970-2, President 1971-3, subsequently honorary member 1976; FARCS – twice elected to the Board, final FFARCS examiner, Joseph Clover Lecturer 1960, Faculty Medallist 1976; FARCSI - Honorary Fellow 1970; ESRA – first recipient of Carl Koller Medal 1984; ASRA – Gaston Labat Lecture 1985; HAS – inaugural President 1986.

The son of a nonconformist minister, Alfred married Norma Sandison in 1930; they had a son (also a doctor) and daughter. His support for the specialty continued until the year of his death, and he could often be seen at conferences making notes for the next edition of the ‘Synopsis’. Many younger anaesthetists, and not just those who had worked with him clinically, remember receiving neat (and greatly treasured) type-written letters of support (or gentle, but constructive criticism) from him on subjects of his particular interest. Away from medicine he had a passion for opera, and was a life-long supporter of Newcastle United Football Club, although often gloomy about its prospects!

Sources and any other comments: Obituary. Anaesthesia 1989; 44: 631. There are other accounts of his life, but this was self-written and is an object lesson on how to do it | Photograph from the author’s collection