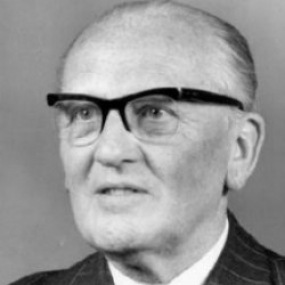 Early PG appointments were as casualty officer & house surgeon, Royal Victoria & West Hants Hospital, Bournemouth and house physician, Addenbrooke’s Hospital, Cambridge. He was then house anaesthetist at both Westminster (1936-7) and Golden Square ENT Hospitals (1938-9) before appointment as honorary anaesthetist to Woolwich Memorial, Princess Beatrice & Italian Hospitals, and anaesthetist at Golden Square. During WW2 he served (1940-45) in Malta, Palestine & France as a Major in the RAMC, returning thereafter to his home town, Nottingham, as honorary anaesthetist to the General, Children’s and Women’s Hospitals. He became a consultant after the inception of the NHS, and subsequently also worked at the local thoracic unit. He retired from these appointments in 1972, but worked part-time at the out-patient unit at the City Hospital for another five years.

Active in both Nottingham’s Medico-Chirurgical Society (president, 1969-70) and the TA (TD, 1969). Honoured to have worked with Magill at the Westminster where his predecessor was Dr Ruth Mansfield and successor Dr (later Sir) Geoffrey Organe.

From a medical family (father & uncle) he married Edith Phyllis Drakeford, and they had three children one, Richard, a consultant orthopaedic surgeon. His main recreation was gardening. For the Church of England he was a Church Warden (1946-8) and later a Member of the General Synod (1970-5).