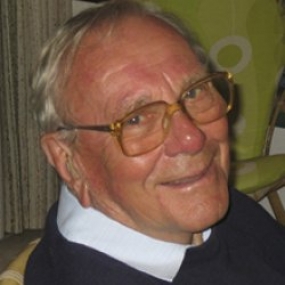 Joined the Royal Navy soon after qualifying, serving in the Far East on HMS Virago, a destroyer, and taking part in the last naval gun battle of WW2. Next day, Virago was bombed and the Captain, the Engineer and Keith were all awarded the DSC for their work. After discharge he was, for a while, a GP in Hertfordshire, but then decided to specialise, undertaking his early training in Edinburgh, Leicester and Hemel Hempstead before becoming an SR in Sheffield and, from 1957, back in Edinburgh. He was appointed a consultant to the Southern Group of hospitals in 1962, later transferring to the Eastern General Hospital, and retiring in 1985, athough he visited Sweden several times thereafter to undertake locums.

The Edinburgh Southern Group was a collection of small hospitals, and Keith worked to build up the anaesthetic service, but progressive closure due to NHS ‘efficiences’ undermined this. At the Eastern General he organised training of theatre staff to ODP standard, set up an obstetric epidural service and enjoyed teaching. A consistent attender at local PG meetings, he was president of the Edinburgh & East of Scotland Society of Anaesthetists (1971-3).

Married to Betty Gardner, they had two children (son & daughter) both of whom became doctors, Fiona also becoming an anaesthetist. Interests included fishing, reading, gardening, opera and walking his dogs, although much of his retirement was devoted to caring for his son who had suffered a serious illness.

Sources and any other comments:
[1] Funeral eulogy (on file) by his daughter, Fiona, who provided the photograph [2] Medical Directory