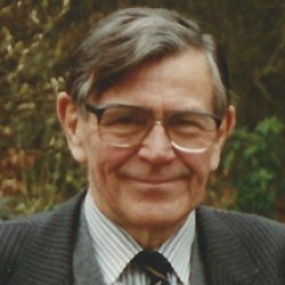 After qualification Laurie did junior hospital jobs in anaesthetics at Bart’s, and worked at Redhill Hospital in Surrey. After a year (1961/2) working in Prof Dripps’s department in Philadelphia, USA he was appointed consultant anaesthetist to the Southampton group of hospitals. During his tenure he had special responsibilities for Lymington Hospital which was near his home. He retired in 1989.

In Southampton he was involved in anaesthesia for thoracic & orthopaedic surgery and, with Dr James Burn, developed a pain clinic, having a particular interest in the treatment of back pain and continuing to attend clinics after his formal retirement.

Laurie was brought up in Crouch End, North London, but his school was evacuated to Wisbech, Cambridgeshire during WW2, where he formed life-long friendships with the Comely family with whom he lived, referring to their daughter Jean as his sister. He had thought of studying engineering, but after serving on minesweepers in the RNVR (1945-7) he went to Oxford to read Astronomy before deciding on medicine as a career. He met and married Anne Wilson, a radiographer from Northern Ireland, in 1958 while working at Bart’s, their wedding reception being held at the Great Hall. For his year in the US they crossed the Atlantic in RMS Mauretania, taking his much loved Triumph TR2 open tourer with them! Thereafter they lived in Lymington where he was a keen member of the yacht club, becoming a partner with James Burn in a boat called ‘JALA’, an acronym from their Christian names. A true gentleman and a devoted family man, he never fully recoverd from Anne’s death in 1994. He left a daughter, Sarah, son John, and grandchildren Alex and Robert.