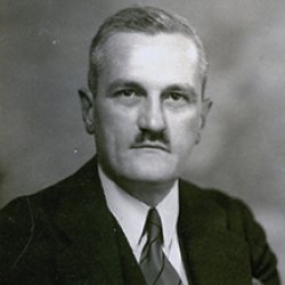 Bourne’s initial intention was to train as a surgeon, but an urgent need for someone to administer anaesthetics delayed the start of that training, and he never returned to it. Details of his early appointments have not been found, but he was in private practice in a variety of Montreal hospitals from 1922 to 1945. In parallel to a busy clinical role he was one of the first clinicians to apply the study of basic sciences to anaesthesia, holding an appointment as Lecturer in Pharmacology. He turned down a salaried appointment at the Royal Victoria Hospital because the combination of private practice and an academic appointment left him free of administrative and teaching duties and able to concentrate on research. Through extensive publication he developed an international reputation based on studies (performed in his ‘spare time’!) of a wide range of subjects relating to the physiology and pharmacology of anaesthesia. Prior to the Second World War there was no organised teaching of anaesthesia in McGill, but during that conflict Bourne, with other Montreal anaesthetists, was involved in the provision of short courses for medical officers in the military. The success of these courses led in 1945 to the establishment of an academic Department of Anaesthesia, the first in Canada, with Bourne as Chairman. From the service courses a three year Diploma progrmme of postgraduate training was developed, and became a model for training across Canada and beyond. Bourne resigned his position on reaching the age of 65 in 1950, but was appointed Emeritus Professor and continued to be active in the organisations of the specialty.

Bourne made major contributions to a number of organisations. In 1920 he was the first secretary of the Canadian Anaesthetists Society, was President of the International Anesthesia Research Society in 1925 (also in 1940), and in 1942 was the only ‘foreigner’ elected President of the American Society of Anesthesiologists, a signal honour. His international standing as an academic, even before the Second World War, is shown by the 1935 award of the very first Henry Hill Hickman Medal by the Royal Society of Medicine in London. During 1952-3, and under the auspices of the World Health Organisation, he was a Visiting Professor in Paris, and during this time contributed to the formation of the World Federtion of Societies of Anaesthesiologists. In 1962 he was one of the first recipients of the Gold Medal of the Canadian Anaesthetists’ Society.

Sources and any other comments:
I would like to thank Prof Brendan Finucane for his assistance, and for a telling quote about Bourne: 'This man left a big wake'! Many papers been written about Bourne, but I have drawn on two: Hanaway J, Cruess RL. McGill Medicine: The Second Half Century, 1885-1936. McGill-Queen’s Press – MQUP, 2006. Griffith HR. Obituary: Wesley Bourne MSc, MD, CM, FRCP(C), FFARCS 1886-1965. Anaesthesia 1965; 20: 376-7.  Image courtesy of the Wood Library-Museum of Anesthesiology, Schaumburg, IL, USA.