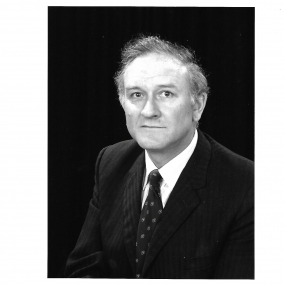 Bill Glover held HP & HS appointments at The Royal Victoria Hospital, Belfast (1/2/51- 31/7/52), followed by HP & HS posts at The Royal Belfast Hospital for Sick Children (1/8/52-31/1/53), and a further HS post at Hull Maternity Hospital (1/3/53-31/8/53). After three months in general practice in Plymouth he spent two years as SHO in anaesthetics at The Royal Victoria Hospital Belfast, 18 months as registrar at Manchester Royal Infirmary, another 18 months at The Hospital for Sick Children, Great Ormond Street, and a final 18 trainee months as SR on the rotation based at Machester Royal Infirmary before being appointed part-time (5 sessions) consultant paediatric anaesthetist at Great Ormond Street in August 1960. After a year spent as a Fellow in anesthesiology at the Mayo Clinic, Rochester, Minnesota, USA he returned to Great Ormond Street and also obtained a 2 session consultant appointment at the Eastman Dental Hospital before becoming Great Ormond Street's first full-time paediatric anaesthetist in October 1963. He retired at the age of 65 on 31st May 1992.

Bill was primarily a clinical paediatric anaesthetist, his practice covering all aspects of the specialty including anaesthesia for cardiac surgery, then in its infancy. Many children required postoperative ventilator support, often for prolonged periods, and Bill provided this, first using a couple of Engstrom 160 ventilators which he resurrected from storage at GOS, supplemented by others purchased from Sweden. With the help of his young colleague, Ted Battersby, and the support of the cardiothoracic surgeons, David Waterston and newly appointed Eoin Aberdeen, he thus established one of the first forerunners of a paediatric intensive care unit in the world. He later pioneered anaesthesia for cranio-facial surgery in children.

He was a member of the Board of Governors at GOS (1974-82) under Audrey Callaghan's chairmanship, and of the Special Health Authority (1982-90), serving as Vice-Chairman of both bodies (1976-90). He joined the RSM in 1958, serving on the committee of the section of anaesthetics (1962-5), and later became a life member. After 50 years of membership he also became a life member of the BMA. He served on the anaesthetic sub-group of the British Standards Institute (1965-80), was a founder member of the Association of Paediatric Anaesthetists of Great Britain and Ireland (president 1989-91 & later later elected an honoraary member). He lectured jointly with Eoin Aberdeen to the RSM on prolonged ventilation in children in 1965 and delivered the Glaxo lecture to the Association of Paediatricians in 1973. He published chapters in a number of textbooks and lectured nationally and internationally.

Bill Glover was a central figure in many developments in both anaesthesia & postoperative care at GOS for over a quarter of a century, the high personal esteem in which he was held by colleagues of all disciplines playing a significant role in the standing of the specialty at GOS. He was always keen to support colleagues, especially advising and encouraging younger anaesthetists (including the author), on their career development. He and his wife Raye had three children, Jillian and twins Ian & Alison, and eight grandchildren.