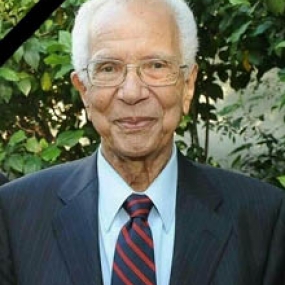 Dr Anis Baraka, one of the fathers of Anesthesiology in Lebanon and the Arab region, under whose capable mentorship and leadership 90% of the Lebanese anesthesiologists trained at AUBMC (American University of Beirut Medical Center) and many Arab and Middle East Anesthesiologists graduated from the Arab board. Dr Baraka was an internationally renowned anesthesiologist and an Emeritus Professor of Anesthesiology, American university of Beirut (AUB) who served the institution for more than 42 years, and shouldered an uninterrupted clinical service of the operating rooms during the very hard times of the civil strife in Lebanon.

Dr Baraka graduated with MBBCh degree (1953) and completed his residency in Anesthesiology (1954–1957) at Cairo University. He then did one year of research fellowship (1963) at the University of Liverpool, and one year of residency (1964) at the National Health Hospital, London. He joined AUB as an Instructor in 1965, and was promoted to an Assistant Professor in 1966, to an Associate Professor in 1971, and to a full time Professor in 1976, and served as Chairperson of the Department of Anesthesiology for the period of 1976–2007. He was appointed as Professor Emeritus in 2008. He has authored more than 460 publications and 9 books. In recognition for his invaluable and long-standing services and contribution to Lebanon and the Lebanese people, he was awarded the Merit Award Decoration and the Lebanese Citizenship by the President of the Republic of Lebanon in 2000. Dr Baraka was the Vice-President of the World Federation of Societies of Anaesthesiologists (WFSA), and was their representative at the Regional Commission of the United Nations. He was awarded the First Rank Education Award from the Ministry of Education, Lebanon in 1990, the First Prize Award of Clinical Medical Sciences, AUB (1987–1988 and 1991–1992), the Shield of the Lebanese Order of Physicians in 1998, the AUB Alumni Association Distinguished Award in 2006, the Honorary Fellowship of the Royal College of Anaesthetists and the International Commission of the Ralph Waters Prize in 1990.

He was also awarded with the WFSA Distinguished Service Award 2016 as a recognition of his exceptional service to the WFSA and the international anaesthesia community. (http://www.wfsahq.org/latest-news/latestnews/528-wfsa-announces-winners-...).

He was the President of the Arab Board of Anaesthesia and Intensive Care, as well as the Honorary President of the 8th Pan Arab Congress. He chaired the Committee on Education and Scientific Affairs of the WFSA and the Examination Committee of the Arab Board of Anaesthesia and Intensive Care.The following quote by Dr Baraka to his medical students says it all about the true nature of Dr Baraka: ‘Never do your job for money, prestige or position. Medicine has a humanitarian message, you do it with love.’ Dr Baraka will be dearly missed by all AUB community, Arab and international community who knew him for his knowledge, wisdom and wit. He is survived by his wife Aziza, one daughter Huda, and three sons Hesham, Tarek, and Khaled. Our thoughts are with his family and his loved ones. God bless his soul and may his soul rest in peace!