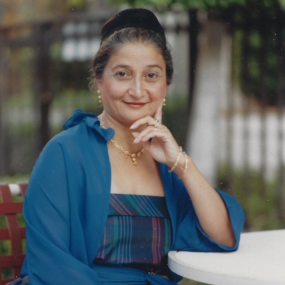 Mani Gazdar was born in Mumbai India on Oct 5,1934. She was one of 3 sisters. She was especially close to her older sister Dina and her children, Delna and Jimmy.

Even as a young girl Mani was very competitive. She excelled in everything she did. She played sports, she danced and won awards for both. All through school she always came either 1st or 2nd in class and was in constant competition with her best friend for that position. Mani said that when she was a young girl in school she knew she wanted to be a doctor and in her first year in Medical School knew she wanted to be an Anaesthetist. Mani came to England in 1960 at the age of 26 and joined the Liverpool anaesthetic training scheme pioneered by Cecil Gray. True to form she was the first female Indian anaesthetist to pass the FFARCS on her initial attempt.

Mani married fellow anaesthetist Prabhakar Mehta in1968 and moved to Middlesbrough, where she and her husband were instrumental in creating the intensive care unit, pain service and obstetric training programmes. She subsequently held all the senior medical management positions in the hospital group, during a period of major consolidation. By force of charm and personality, she helped disparate medical colleagues and personalities integrate to provide a step change in service provision.

Although Prabhakar died suddenly after only 14 years together he was always in Mani’s thoughts. It is a testament to her indomitable drive and ability that she continued their pioneering work and, together with the late Dr Ian Mair, ensured that the department flourished. She succeeded in developing anaesthetic training rotations with Newcastle at registrar and senior registrar levels. This, and her commitment to protecting training time whilst pursuing outstanding service delivery and development, attracted many leading anaesthetists to work there with her.

It would, however, be wrong to just remember Mani’s medical achievements, vast though they are. She was, to the very end, a true party animal. Her parties were the stuff of legend and her dhal famous. She attended many of the World Congresses of Anaesthesia, firstly with Prabhakar and then with a group of friends. She supported many specialist anaesthesia societies and would attend their annual scientific meetings for both the science and the socialising.

When Mani’s niece Delna married Terry in 1987 and moved to the US, Mani became increasingly close to them and their children Neisha and Darian She  visited twice a year and would tell everyone that they were her family.

Sadly, in her later years, Mani developed Parkinson’s disease but, again demonstrating her pragmatism, she moved from her family home to an apartment in a local retirement village. There she coped magnificently with her increasingly restricted mobility. Eventually she moved to the nursing facility in the retirement village becoming a demon in her mobility scooter!

Mani died suddenly on the 30th of December, still enjoying life and her friends’ company.