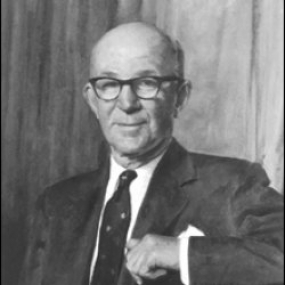 After house appointments in London and Montevideo Macintosh started giving dental anaesthetics at Guy’s while training as a surgeon. His skill was such that he built up a lucrative private practice and formed a partnership known as the ‘Mayfair Gas Company’ and employing technicians to assist the anaesthetist. Socialising at Huntercombe Golf Club near Henley, he was with a medical group to whom Sir William Morris (later Lord Nuffield) announced his intention to fund a number of clinical Chairs at Oxford. Hearing the list of subjects Macintosh observed that anaesthetics had been “left out again” and, while nothing more was said then, Nuffield obviously took the comment seriously. Perhaps impressed by the quality of an intravenous anaesthetic given by Macintosh, Nuffield not only added anaesthetics to the list, but increased the size of his benefaction to accommodate it, made the gift conditional on there being such a chair when the University demurred, and insisted that Macintosh was appointed to it! He held the post, the first chair in anaesthesia outside the USA, from 1937 until his retirement in 1965. During WW2, holding the rank of Air Commodore, he was director of anaesthetic services for the RAF and the Royal Navy.

Recognising his lack of academic training, Macintosh started his Oxford career by visiting many centres at home and abroad. Three vital weeks were spent in Ralph Waters’s department in the USA where he saw much which he wished to adapt to home circumstances, notably research work involving basic scientists. He did not find Oxford’s scientists as collaborative, but he overcame that by employing his own. Before settling in to Oxford, and still in 1937, Macintosh spent six weeks in Spain working with plastic surgeons treating civil war injuries, and quickly recognised the need for a simple, portable vaporiser that would deliver known concentrations of ether under field conditions. Thus was started, with Drs K Mendelssohn and HG Epstein, a project which produced a series of such vaporisers over many years, 4,000 alone being produced in Nuffield’s factory for Armed Services and civilian use during WW2. He also advised Nuffield on the production of ‘tank’ ventilators for the management of patients with poliomyelitis.

War-time projects included training courses for service anaesthetists, and research into methods of artificial ventilation, provision of respirable atmosphere in submarines, design of life-jackets and determination of the maximum altitude at which airmen could bale out without oxygen. Almost ‘in passing’, he published the description of his now near universal eponymous laryngoscope in 1943! In spite of this successful portfolio, and despite incessant pressure from Macintosh, the University did not honour its promise to create space for his department after the war so he turned his attentions elsewhere. Macintosh was a clinical anaesthetist with a mission to make anaesthesia safer, and he did this in various ways. He loved teaching, especially in small groups and in theatre and, while less comfortable lecturing or reading papers, he travelled widely to spread the word. He also wrote extensively, many papers and several classic textbooks, most of the latter being translated into other languages. Most importantly he identified shortcomings in anaesthetic theory and practice that affected patient safety, set in motion (against establishment resistance) research to improve this, and obtained funding for nurses to assist the anaesthetists. As a result of all of this his contributions to safer anaesthesia was recognised worldwide.

One ‘award’ he did not receive was the DA(RCP&S). Macintosh was appointed to the Oxford Chair at about the same time as the DA was instituted, and the regulations allowed senior anaesthetists to receive it ‘by election’. However, this required an appointment to a ‘teaching’ hospital and, at that time, the Radcliffe did not meet the requirement. Perhaps to make a point the new Nuffield Professor knuckled down to the books and passed the exam in 1939. No such nonsense intervened in 1948, and Macintosh was not only a foundation Fellow, but also a member of the inaugural Board.

Macintosh’s father had international business interests that took his family all over the world, and some of the young Robert’s early life was spent in Argentina where he learnt to speak fluent Spanish. He came to England during WW1, and was commissioned into the Royal Scottish Fusiliers in 1915, but soon transferred to the Royal Flying Corps. Mentioned in Dispatches in 1917, he was shot down over France that year to become a prisoner of war in Germany where he made several unsuccessful escape attempts and learnt to speak fluent German.

After demobilisation he decided to stay in England to study medicine. A skilled boxer in his youth, he had a keen interest in sport, first meeting and befriending Morris/Nuffield through golf, enjoying swimming and tennis, and learning to ski in his sixties! He married Rosa Marjorie Henderson in 1925, and was left desolate when she died in 1956, but in 1962 he married Dorothy Ann Manning (Ann) to whom he attributed the happiness of his retirement. There were no children of either marriage.

Macintosh was a quiet, modest individual, but a man of immense courage as seen in his WW1 service, acceptance of a near unique appointment in the face of significant local antagonism, sitting the DA examination after becoming Professor, and taking on the anaesthetic establishment in the UK to institute studies of anaesthetic mortality. He was a strict disciplinarian, but very supportive of the juniors and associates in his department, and indeed of colleagues he met at home and around the world, particularly doing much to expand the numbers of academic anaesthetists. These traits, coupled with the importance of his work, engendered huge respect, loyalty and indeed affection. Anaesthesia would not be what it is today without him.

Sources and any other comments: Much has been written about Macintosh (e.g. Oxford Dictionary of National Biography, Obituaries in Anaesthesia 1989; 44: 951-2 & BMJ 1989; 299: 30), but arguably the best account of his life was written by Prof Sir Keith Sykes (Careers in Anesthesiology Vol IX, published jointly in 2005 by the Wood Library-Museum of Anesthesiology and the AAGBI, ISBN 1-889595-14-4), and we thank Sir Keith for reviewing this summary. Dr C Mack Holmes (a distant cousin) also provided comment. More detail of the Oxford years is to be found in Beinhart J, A History of the Nuffield Department of Anaesthetics Oxford 1937-1897, Oxford University Press 1987, ISBN 0-19-261648-X. The Wellcome Library in London holds extensive archive material – 34 boxes of papers. We thank the Nuffield Department of Anaesthesia, University of Oxford for the photograph of their painting.