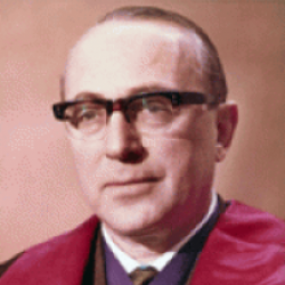 Also known as: Bill to a few, Prof to most

First appointment was as house surgeon, King George Hospital, Ilford, then was sequentially dental anaesthetist, Queen Mary Hospital, Stratford & clinical assistant to Surgical Outpatients Department, London Hospital before becoming, in 1936, honorary anaesthetist, Central London ENT Hospital and anaesthetist, Royal Dental Hospital. At the outbreak of WW2 he joined the Emergency Medical Service, but in 1942 was recruited to be Robert Macintosh’s first assistant in Oxford. In 1947 he was invited to become director of the department at Cardiff Royal Infirmary, being appointed to the chair at the Welsh National School of Medicine in 1953, holding this position until his retirement in 1973.

Mushin’s career really started with his time in Oxford, his collaboration with Macintosh resulting in two seminal texts: ‘Physics for the Anaesthetist’ and ‘Local Anaesthesia: Brachial Plexus’. His recruitment to Cardiff was essentially because of concerns about the quality of the clinical service, and improving this was an early priority. A skilled clinician, he involved himself in all aspects of anaesthesia, including pain management, intensive care and what is now referred to as perioperative medicine, ward teaching sessions being appreciated as much as his formal teaching and lecturing skills. Research and development flourished across a wide range of subjects, his appointment of a basic scientist, W W Mapleson, leading to classic studies of many fundamental aspects of anaesthesia. A skilled administrator and committee man he made huge organisational contributions at local and national level, notably being Dean of the Faculty (1961-64). His work was recognised in many ways including: CBE (1971); MA, Oxford, 1946; FFARACS(Hon), 1959; FFASA(Hon), 1962; FRCS, 1966; John Snow medal, AAGBI, 1974; Henry Hill Hickman Medal, RSM Section, 1978; and DSc(Hon), Wales, 1982. Some viewed Mushin as an autocratic and sometimes controversial figure, but the establishment in 1968 of an eponymous lecture by his colleagues says much about how he was viewed by those closest to him.

Married to Betty Goldberg, with a son and three daughters, his home life and Jewish faith were important to him, and he was a generous host.

Sources and any other comments: A number of obituaries were published on Mushin, but the most comprehensive is by his colleague, John Lunn. Anaesthesia 1993; 48: 461-2 | Medical Directory